(Haven't pre-ordered the It Was Metal comic anthology or album yet? Please support the project on Kickstarter by clicking HERE.) 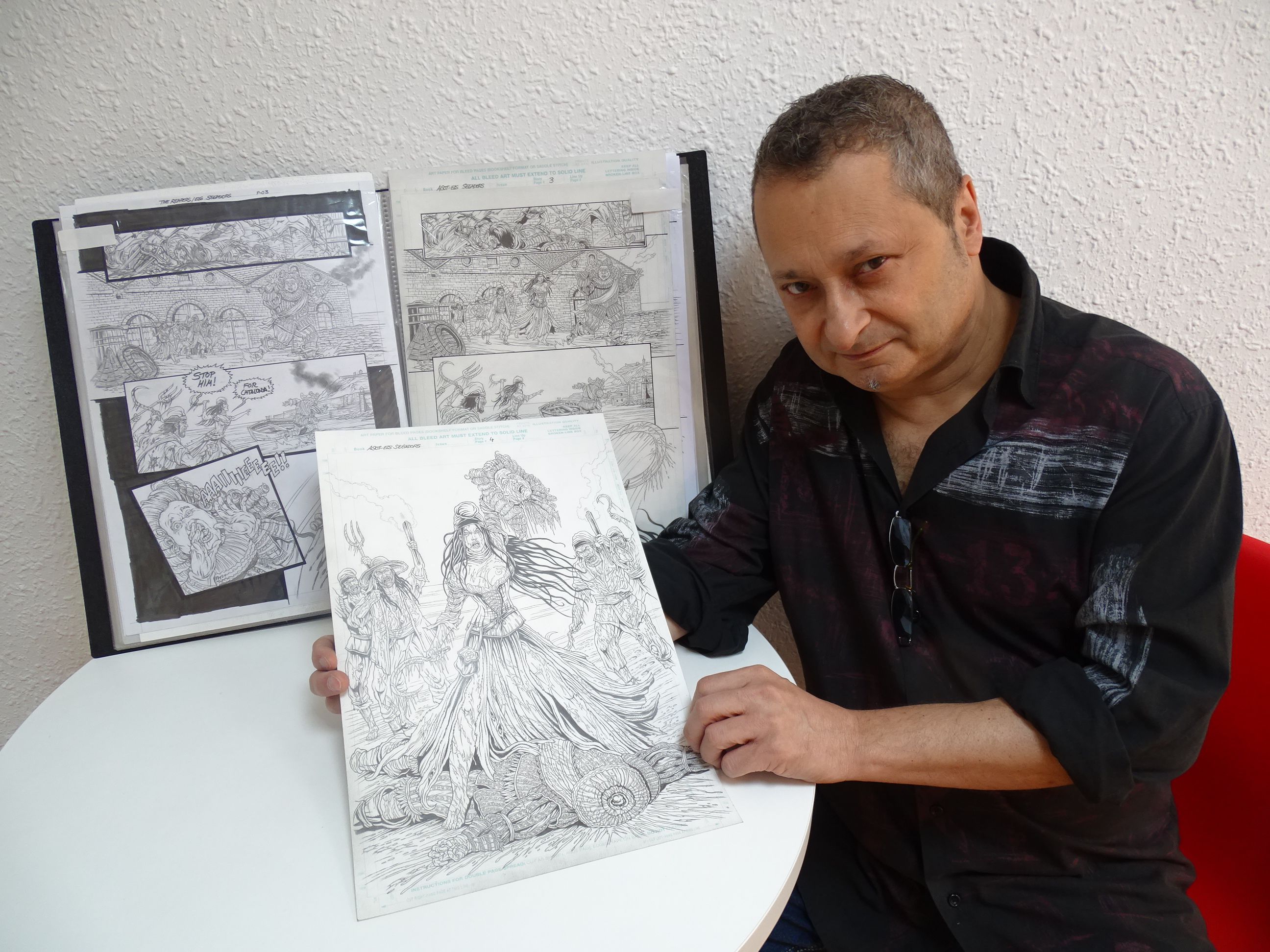 ASOT: What are your thoughts on the connection between music and comics?

Mike: Beyond the cultural parallelism between comics and rock (whose paths cross constantly) I have always believed in a great connection between the narrative and visual rhythm of a comic and the rhythm of a musical composition. Although the comics apparently lack sound, I always feel that visual narration has a rhythm, which could perfectly turn into music. It could be a harmonious or dissonant rhythm, or lyrical, or epic, or violent rhythm... depending on the scene we are drawing. In the same way, teamwork in comics, between the drawing artist and the colorist (for example) is similar to the work between musicians, who must harmonize by playing together so that the group works well. Definitely, comics have music. And everyone has their own music.

Mike: I'm almost as old as rock and roll (laughs). In my youth, back in the 70s, I was crazy about the first metal bands, what was then called “hard rock”. I was a fan of the British groups of that time: Black Sabbath, Led Zeppelin and especially Deep Purple. Then came many other European metal bands: UFO, Judas Priest, Motörhead, Iron Maiden, and also American bands like Van Halen and Metallica. I'm a fan of all of them. And I also really like the British bands from the first punk era, like The Clash. But in my heart always will be Deep Purple and Motörhead in the first place, because their songs marked my youth.

ASOT: What was the first concert you attended?

Mike: Now is when I'm going to disappoint the heavy metal fans (laughs). If I remember correctly the first band I saw live was Blondie, in "Canet Rock" a very famous festival at that time in Catalonia, Woodstock style. That would be around 1976 or 1977 and I remember that I was very close to Debbie Harry. Better not tell you what we smoked then (again laughs).

ASOT: What was the last concert you attended?

Mike: It's been a long, long time since I've been going to concerts. That's because my artistic work occupies almost all my time. I listen to music from my computer while I draw in my studio. But at least I can say that my last concert was to see AC/DC in Barcelona (although it was a very long time ago, in a Galaxy far far away...). But of course I hope I can go to an A Sound of Thunder concert the next time they come to Catalonia!

ASOT: Do you play an instrument, and have you ever been in a band?

Mike: Although my grandmother told me that I have the hands of a pianist, I never dared to take that step. Musically I am disastrous. So I think I did very well to dedicate myself to something else, for the benefit of music (laughs).

ASOT: If you had your own band, what kind of music would it play, and what would it be called?

Mike: What a question, by Crom & the Seven Kingdoms and by all the gods of the Avernus !! Of course, it would be something hellish ... something between Viking Metal, Thrash Metal, with some name taken from H.P. Lovecraft or one of my old comics, when I was into horror-gore. For example, it could be called "HAMRAMR" (it's the title of one of my old horror series, in fact ... hahahahahaha)

ASOT: When did you first hear A Sound of Thunder’s version "Els Segadors"? And how did you get to do comics inspired by this song?

Mike: I think now is when it's time to get serious. I do not want to get too involved in the political issue here. But I am Catalan, and I also believe that all the peoples of the world have the right to decide their destiny. So I am a supporter of the independence of Catalonia, outside of Spain. Well, on October 1 we organized a referendum in Catalonia, which Spain tried to repress by all means, violence included. I lived that day in a very intense way, with very hard moments too. And I remember that a few days later, on October 4, I heard A Sound of Thunder’s version of "Els Segadors" for the first time on the internet. I do not get excited easily; those who know me know it. But after all I had lived the previous days, when I heard Nina's voice when halfway through the song she started singing in Catalan ... well, I could not help spilling some tears, while listening to her powerful voice. I will always remember the emotion I felt at that moment. What did I do then? I searched the internet and social media, until I found A Sound of Thunder and especially Nina Osegueda. Immediately I discovered that she is of Catalan origin. There was the explanation of why a Washington metal band had made this song. I did not think twice, I wrote a private message to Nina explaining what I had felt when listening to the song and that I was a Catalan comic artist and that I would be available for ASOT if in the future they needed something from me. I think Nina took about 5 minutes to answer me by saying something like "maybe we have something for you ..." and "Could you make some comic pages for us?" Nina told me that she would like the Els Segadors comic book to be made by a Catalan artist, so we quickly agreed. I also liked that she wanted an adaptation with historical background because initially I was going to propose a version with demons and zombies or something crazy (laughs). A few days later I was already involved with Nina and Josh conspiring together to see how we could do this. This is how we have come to do this first collaboration together, for "It Was Metal".

ASOT: The song "Els Segadors" is a metal version of the current anthem of Catalonia. What is the song’s historical origin?

Mike: The current lyrics of the Catalan anthem "Els Segadors" were written in 1899, but its origin is much older. The lyrics of the original song are a call to defend the freedom of the land. It includes the events that took place during the so-called "Corpus de sangre", a revolt carried out by around a thousand reapers in Barcelona, on June 7, 1640, which culminated in the death of the Viceroy. This uprising was the beginning of the uprising in Catalonia in 1640 or War of the Reapers (1640-1652). This is the historical moment in which we have placed the action in our Els Segadors comic story, which show at the end and in an epic way, the death of the Viceroy at the hands of our imaginary character the "reaper woman".

ASOT: What comes to mind when you think of your work on the Els Segadors comic? (Any particular challenges, favorite aspects, changes you made, etc.?)

Mike: It has been a short, but intense job. Although the story is only 4 pages, I wanted to do exhaustive research about the costumes of civilians and military in Catalonia in 1640. Although I always like to bring a fantastic touch to the appearance of the characters. For example, the dress of the Viceroy is very exaggerated, to differentiate it from soldiers or reapers. I've done a few sketches for the Reaper Woman, to fully define her appearance. And I've done some hyper-worked storyboards for the pages, following the script of my friend Marc Gras. This is where I should talk about my team in this work: Marc Gras was a student of mine in a famous school of comics in Barcelona where I have been working for many years: Escola Joso. Marc is a scriptwriter, comics artist and has also been an editor. I thought of him for the script when Josh and Nina asked me to adapt their song in comics. And the colorist on the story is Diego L. Parada, another ex-Padawan of mine, who has already become a great colourist, with whom I also work for the French market. We exchanged a lot of ideas among ourselves about the composition of the pages, and the elements that had to be highlighted, as well as details for the intonation of the color in this story, which is something like the direction of photography in a film. It has also been a pleasure to share all those ideas with Nina and Josh. I remember very funny moments discussing certain details about our Reaper Woman. (ASOT: Mike is talking about nipples!)

ASOT: When working on the story, were you inspired by any particular comics creators, stories or characters? What references of your own did you bring to the story?

Mike: I have an artistic trajectory of more than 30 years. So I have what I think is my own style and my own way of doing things. But when I'm working on a project that I really like, I'm deeply involved. For example, in Els Segadors there was no place for too many main characters, due to the short story format and historical references. But I came up with the idea of focusing the  attention on a character, who could lead the reader from one image to another. And since this character was going to be a reaper, I thought it would work very well if I were a woman. A revolutionary woman, a bit like the woman with the naked breast of Delacroix's famous painting "Liberty Leading the People" of 1830. And whose clothes were also all in red, and covered with blood and with one or two sickles in her hands. That would highlight a lot, and I also thought it important that the character was a woman ... maybe because Nina is the singer of a heavy metal band! And here is where I present another of my usual collaborators: the Belgian model Seffy Moon, with whom I have done many illustrations and covers. When I proposed to use her as the basis for our "Reaper Woman", she was delighted to participate!

ASOT: What is your latest project that you would like to promote?

Mike: "Stalag X" has just been published in the United States with The Vault as editor. This is a graphic novel Space Opera genre, which I've drawn whole and  where I'm co-author, along with two great American writers: Kevin J. Anderson (writer of best-selling novels, including all the latest in the saga "Dune") and Steven L. Sears (screenwriter of TV series, including "Xena, Warrior Princess" among others). It is quite possible that we do a continuation "Stalag X" or maybe a spin-off series. We'll see !

By the way: thank you very much for this interview! It has been a pleasure ! Long life to ASOT! VISCA CATALUNYA LLIURE !!